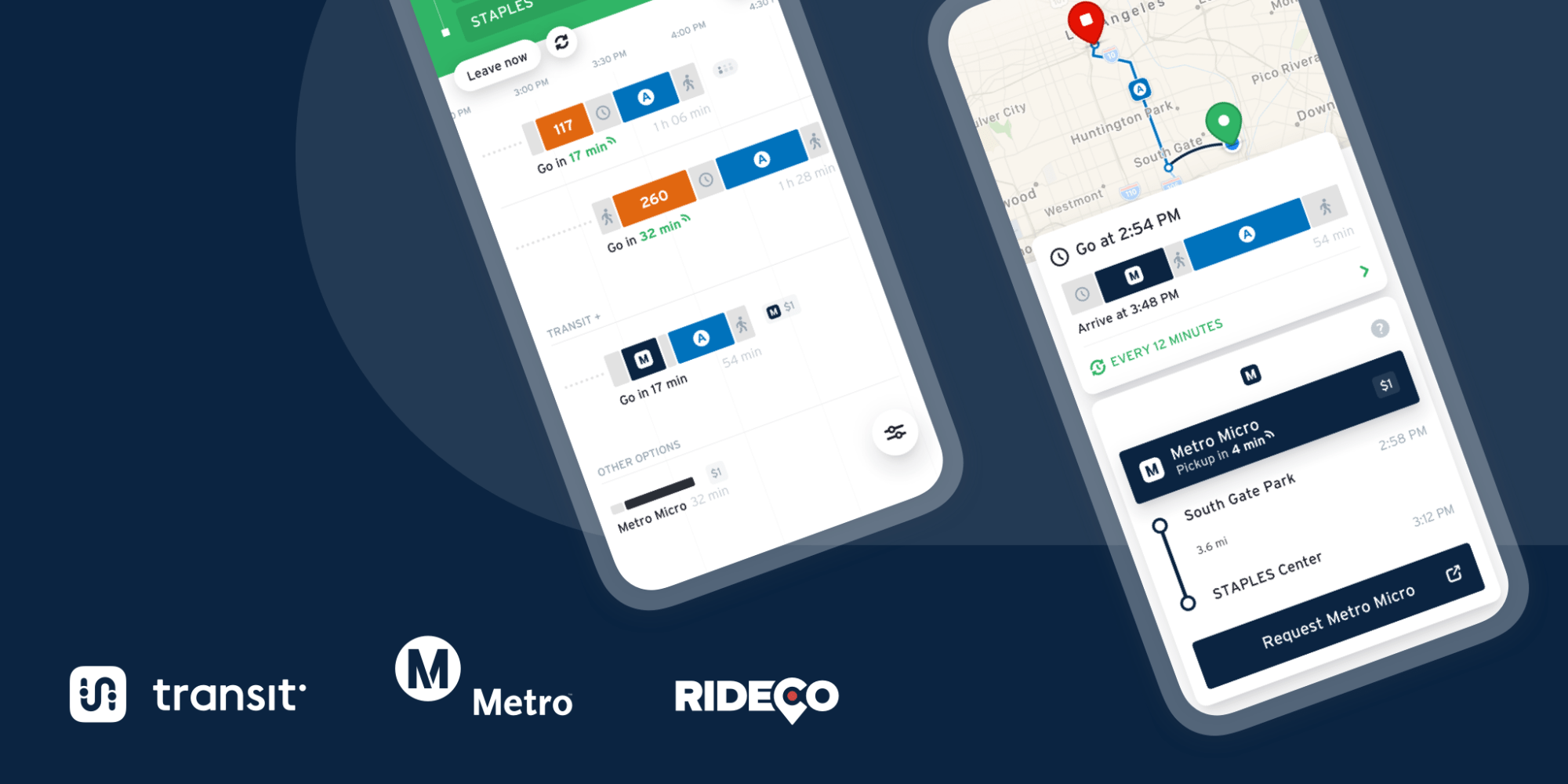 This is a first-of-its-kind integration combining publicly-run microtransit and fixed-route service in a single app that riders use every day. Passengers can now plan a trip in Transit to their destination using a combination of Metro Micro, Metro bus or Metro rail, then link directly to the Metro Micro app to request their ride.

With just one app, passengers can now conveniently and quickly plan rides across multiple modes of travel. This streamlined experience will save time and make it easier for those trying to determine how to get from one part of Los Angeles County to another with multiple transfer points.

Transit users in Los Angeles County can seamlessly access Metro Micro service from the app they already use to plan trips. Whenever a user opens Transit in a Metro Micro service zone, they see a prominent “request ride” button on the app’s home screen, alongside other transit options.

When a user enters a destination, Transit suggests itineraries that feature Metro Micro, for either point-to-point service or as part of a multimodal trip that links on-demand service with Metro’s bus and rail network. With just one tap in Transit, users can seamlessly connect to the Metro Micro app and request their ride.

This marks the first collaboration between Transit and RideCo, an industry leader in on-demand transit solutions. A growing number of transit agencies are looking to microtransit as a means to complement traditional fixed-route service and extend the reach of their network, and this collaboration between Metro, RideCo and Transit brings the power of on-demand transportation to riders’ fingertips.

Metro Micro, operated by Metro employees in partnership with RideCo, Inc., is designed to replace short solo trips by offering a flexible, on-demand service in vehicles that hold up to 10 passengers. Along with other safety measures, capacity is currently limited to five passengers to reduce risk during the COVID-19 pandemic.

Metro Micro is available in five zones throughout Los Angeles County, all of which connect to Metro’s light rail, subway, and bus rapid transit network: Watts/Willowbrook, LAX/Inglewood, North Hollywood/Burbank, Compton/Artesia, and El Monte. Rides, which must begin and end within each zone, cost an introductory rate of $1 per ride (transfer not included). Four more zones will be added in Summer 2021.

Quotes from Transit and RideCo

“Metro Micro is going to have a mega impact for Metro riders in Transit,” said David Block-Schacter, Chief Business Officer at Transit. “By adding microtransit to its official app and bringing together on-demand service with fixed-route transit, Metro is helping customers make the most out of its entire network. We’re excited to start our collaboration with RideCo and bring Metro riders an easy way to integrate Metro Micro into their commutes.”

“This new integration is another step towards providing a transit experience that is more customized to rider needs,” said Prem Gururajan, CEO and Founder of RideCo. “With Transit now helping to connect on-demand trips seamlessly with other modes, trip planning is easier than ever. We are proud to be partnered with innovative organizations like LA Metro and Transit!”

Embraced by an increasing number of agencies during the pandemic, mobile ticketing in Transit has become a must-have during the ridership recovery