Millions of riders. Billions of trips. And we’re only getting started.

Transit launched in 2012. Now, it’s the biggest public transportation app in the US. (If you check the app store navigation charts, you’ll see us perched right behind Google Maps and Waze.)

How have we gotten so big? Over the last four years, Transit has re-invented what public transportation should feel like. Not stressful, tedious, or confusing — but simple, intuitive, and fun.

Yes. Actually fun. Which — to those of you who’ve never used Transit — might sound totally ludicrous. But things are about to get even more ludicrous. Just wait till you see what we’ve got in store today…

There are lots of transit apps out there. What makes ours so special?

Instead of forcing you to plan a trip to get transit information (like Google Maps and many others) we display nearby departure times instantly. As the overwhelming majority of transit trips are commutes to work and school, most riders already know where they’re going and how to get there. What they really want to know is exactly when their ride is coming.

But Transit has added more real-time data than anyone else — which means we can tell you exactly when your ride will show up.

Transit is often the first and only app to support real-time data in a city. After all, we aren’t afraid of getting our hands dirty. Our team can integrate obscure, cryptic data better than anybody.

But transit data is just the icing on our delicious, multi-layered transit cake:

Taking public transit is stressful. There are so many variables. Am I running late? Should I start sprinting? Will I make it in time to catch the express, or will I have to take the slow local bus? How many stops are left until my destination? Did I miss my transfer? Why am I not wearing pants?

That’s why we built GO: your new personal transit companion.

Using voice and push notifications, GO manages each aspect of your trip so you don’t have to think about….

Let’s start with the first part of your journey: leaving your house. GO tracks your vehicle’s position in real-time, then tells you exactly when you should start walking to your stop.

And if you’re walking too slow? GO monitors your walking speed and your vehicle’s real-time position to make sure you stay on pace.

We’ll also tell you to hurry up if an arrival time skips ahead. Sometimes, the real-time data provided by cities can be unreliable. ETAs jerking up and down like a mattress at summer camp. If that ever happens, we’ll let you know.

What about once you board your vehicle? No need to obsessively check your phone (or look out the window) to remember when to get off. Because once you type in your destination, GO will monitor your progress.

You’ll get a voice alert (and push notification) a few minutes before you arrive. So if you want to nap, GO ahead. We’ll wake you up with a luscious, robotic British accent.

If anything else happens to go wrong during your journey, GO will tell you.

No matter how unpredictable your transit gets, GO will keep you on track.

GO is a completely new way to travel your city. It’s the first ever real-time GPS for public transit. It manages every aspect of your trip so you don’t have to worry about a thing. Our voice alerts make sure you don’t have to pull out your phone ten times per journey, and our hyper-smart riding predictions are getting smarter by the day.

(So why haven’t you tried it yet? Download here.)

Transit is the king of real-time transit data: you can see real-time arrival predictions for nearby routes as soon as you open the app. However, until now, you couldn’t see that real-time data in our trip planner. But those dark days are over.

When you were planning trips before, Route A might’ve always been “theoretically” faster than Route B. But the fastest trip in “reality” is often quite different. Now, with real-time trip planning, you won’t have to gamble on which trip will be fastest. You’ll know for sure. Save your luck for bingo.

(We’ve added service disruptions to the trip planner, too.)

Our trip planner is more powerful than ever. But it’s also easier to use.

Some trip planning apps overwhelm you with too many options. Others make you tap through a million screens to access the info you care about: Departure times. Trip length. Time between transfers. Walking distances between stops. Arrival time.

But our trip planner shows you that info right away, with visual timelines so you don’t have so much to read. We show you when your ride is coming, how frequently it comes, and when to transfer. And we’ve grouped together similar trips so you know how long you’ll have to wait in case you miss one.

Say hello to our new investors, Accel (Facebook, Spotify, Dropbox, Etsy, Slack) and Accomplice (DraftKings, AngelList, Hopper, Crew). And hello again to our earliest investors who are back for round 2: Real Ventures and BDC.

We’ve always been known for running a lean team. In fact, everything you see in Transit today was built with<$1M in funding. So imagine what we can get with $2.4M. Running water in the office, hopefully.

For starters, we want to improve the precision of our data. There are still a lot of cases where stated departure times aren’t when the actual vehicle shows up. Why? Some cities don’t have real-time transit data, and even in cities that “have real-time data” ( ) it’s often spotty, imprecise, and unreliable.

Out of all the tech provided to public transit riders, real-time data is the one they value most. Luckily, we’ve reached the scale where we can start producing real-time data ourselves. (Crazy app uptake + riding data + math wizardry = many surprises in store.)

For seconds, we want to be the most reliable source of transit info when hits the fan. Last year, when Winter Storm Jonas wrought havoc on the East Coast, the info wasn’t just inaccurate. It was practically non-existent. People were walking miles in the snow to stations, greeted by paper signs that said “no trains.” People were standing in the cold for hours, until being informed by agency staff that “If you see the buses running, then they’re running.” Agency workers, radio broadcasters, and TV hosts all had no idea what was going on. We worked all weekend to help our users make sense of the chaos. But we’re going to get much, much better at it now.

Finally, for dessert: we will make it easier than ever to access alternative transit options. Way back in 2014, we became the first public transit app that let you hail an Uber. We quickly became Uber’s leading referral partner. After Uber, we became the first public transit app to integrate carshare booking for multiple providers. Then we added bikeshare unlocking and payments. Now riders buy thousands of passes and unlock over 100,000 bikes every month.

Uber. Carshare. Bikeshare. Transit has been at the forefront of multimodal transportation, but we’ve barely scratched the surface. We want you to have every transportation mode available at your fingertips, in just a few taps. Across modes… Across agencies… Across cities… Acroissant…

Papa’s got a new pair of shoes. And he’s also got a brand new name.

The artist formerly known as Transit App is now just… Transit. It’s less clunky, and better reflects our goal: to make urban transportation as simple and smooth as possible. Not just the digital interface, but the physical experience too. That goes way beyond just being an app.

We also updated our icon. Our old one was green. Our new one is also green. But less “neon fungus” and more “shamrock seabreeze”. (When public transit is unpredictable, we hope you’ll get lucky.)

GO is the most advanced transit navigator out there. Our real-time trip planner makes it easier than ever to pick the fastest route. But these features are just the tip of our iceberg. (We’re Canadian. Our icebergs are large.)

We can’t wait to unveil even more cool stuff in the coming months. But it’s only thanks to our awesome squad of engineers, designers, riders, investors, and pants-finders that this is possible. So thanks for being with us on this crazy ride.

Here’s to a billion more.

Why we’re introducing subscriptions at Transit 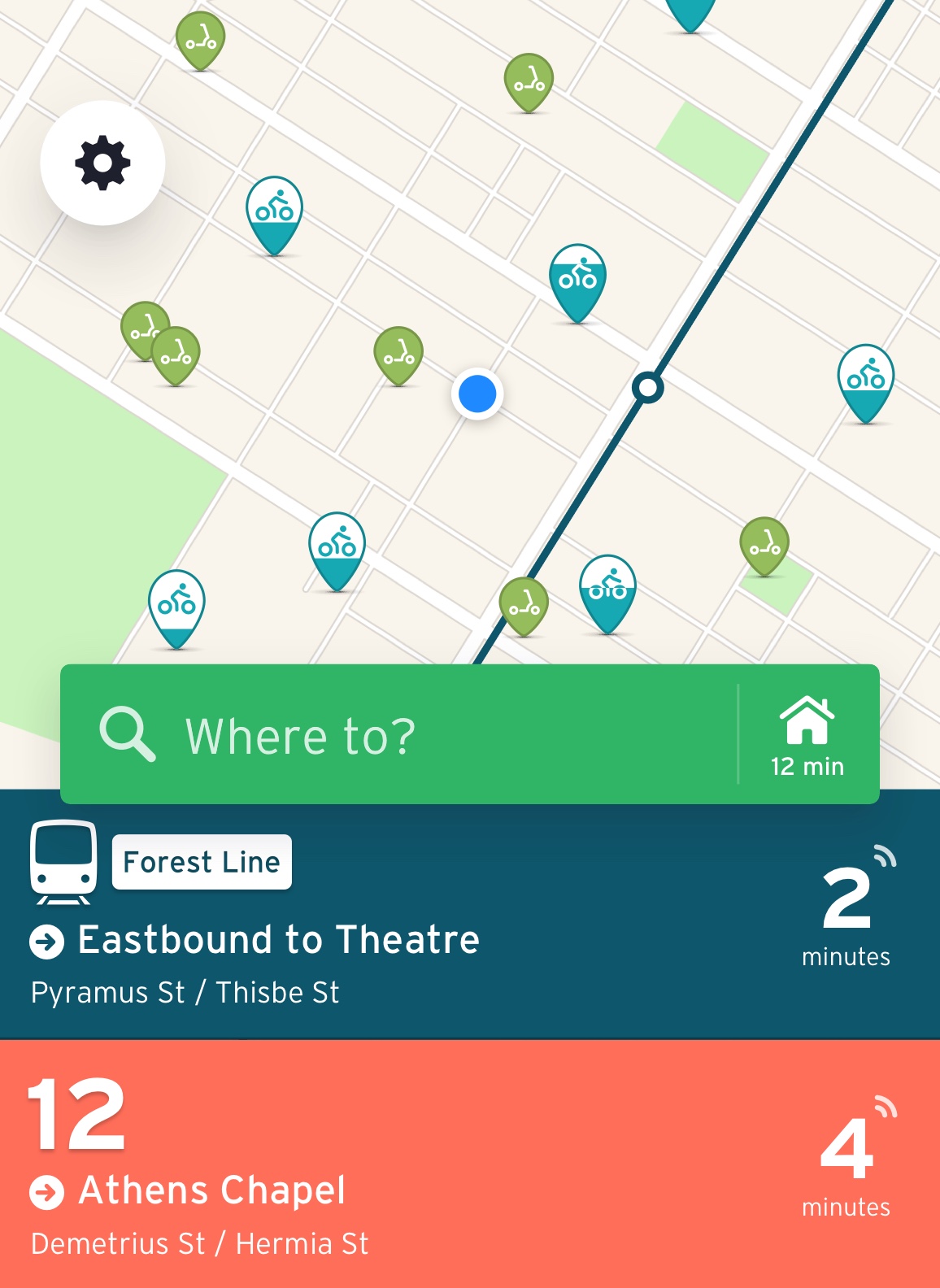